Our Entity
visit us

How Art Helps One Patient Recover From A Rare Brain Condition 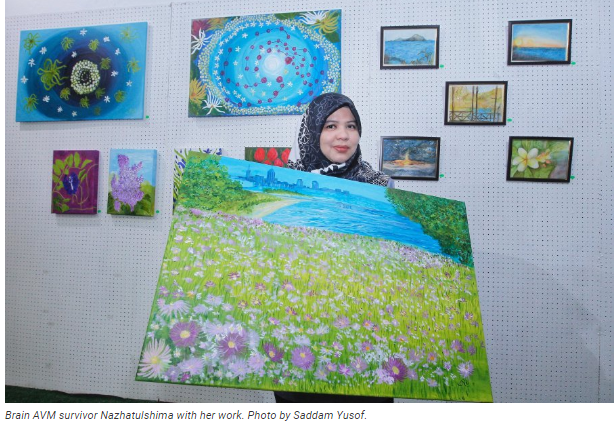 For one patient with a rare brain condition, painting has helped her to recover, writes Nadia Badarudin.

HAVE you ever wondered what it is like to wake up one day and not be able to do things you were once good at, or have forgotten how to carry out simple house chores, or sign your own signature?

English lecturer Nazhatulshima Nolan, 47, knows how frustrated it can be as she went through such an experience due to a rare condition called brain arteriovenous malformation, or brain AVM.

Brain AVM is an abnormal vascular communication between arteries and veins, where the former directly flows into the latter without passing through the capillary system, which can lead to various complications such as infarction (stroke), seizure, brain haemorrhage and death.

Recent studies have found that brain AVM occurs in one in every 1,000 persons and is more common in men. The cause of the condition is unknown.

Nazhatulshima had to undergo an embolisation procedure followed by a craniotomy in 2013 to remove the AVM. One of the things that have helped the mother of two to recover is painting.

Nazhatulshima was diagnosed with brain AVM in 2011, when the AVM burst and caused severe bleeding on the left side of her brain. It affected the bodily function of the right side of her body.

“All of a sudden, I wasn’t able to walk and move. I had double vision and couldn’t see clearly. It affected my memory too. I had to relearn a lot of things including reading the Quran, cooking my family’s favourite dish, writing the alphabet in the correct sequence and even signing my own signature. I had to practise signing my name over and over again. I got my daughter to teach me how to perform the wudhu’ and remember the sequence,” says the senior lecturer, who works at Universiti Teknologi Mara in Segamat, Johor.

She says that during treatment, her condition was described by her doctors as “a walking time bomb” because the AVM could burst again anytime.

“I wasn’t allowed to travel on the plane or do things that I love like mountain climbing and hiking. I had to avoid taking the stairs too.

“It’s frustrating not being able to do your work or things that you love or were once good at. I was active and independent, so being dependent was very challenging.

“My temporary disabilities demotivated me. But art helps me to feel able again. It helps me gain confidence,” she says.

“I didn’t research about art therapy at that time. Art came naturally to me. Maybe it was because I had been painting since I was young,” she says.

“After the surgery, I found it exhausting to do certain tasks like marking students’ papers for hours. But I turned that exhaustion and pressure into inspiration for my artworks.

“From sketches, I started painting again, switching back and forth between colour pencils, water colour and acrylic paint.

When I painted a person, I tried to recall my memories with him or her. I wrote poems to help me express the pain that I couldn’t explain to help me recuperate,” she adds.

When did she realise that art has had an impact on her recovery? “When I no longer felt the pressure or pain every time I finished a painting,” she replied.

Nazhatulshima’s post-surgical experience turned out to be a blessing in disguise as it brings her ‘incidental’ recovery-inspired art to a new level.

In February, she exhibited 45 of her paintings at an Art Market Malaysia exhibition in Da Men Mall, Subang Jaya, Selangor.

“It’s difficult to say that I’ve fully recovered, especially when I compare myself with the old active me. But if measured by basic and daily important tasks, I’m grateful that I’m able to perform them.

“I learn to accept and focus on the things that I can do and not be the multitasker I used to,” she says.

“What matters most is to stay positive. I’m positive that my situation is temporary. Back then, I was told that there’s no guarantee that I’ll get back my memory and that the chance of me surviving was 50/50.

“I’m grateful to my husband, Adib Lukman Ismail, and my children, Afiqah Nadzirah and Arif Nukman, who are always by my side to help me get back on my feet again.”

Professor Dr Ahmad Sobri Muda, a specialist in clinical radiology, neuroradiology and neurointervention, says brain AVM is a rare condition. “Latest studies estimated up to 0.1 per cent incidence, meaning in every 1,000 population, there will be one brain AVM case. So based on the Malaysian population, the number is estimated at around 30,000 patients.

“An estimated two-thirds of AVM cases occur before the age of 40. Every year, about four of 100 people with AVM will experience haemorrhage. Each patient who has this haemorrhage has a 15 to 20 per cent risk of death or stroke, 30 per cent neurological morbidity and 10 per cent mortality,” says Dr Ahmad Sobri, who heads the medicine and health sciences faculty at Universiti Putra Malaysia.

Brain AVM cannot be detected earlier. Typically, the patient is only diagnosed when presented with bleeding in the brain, haemorrhagic stroke or a seizure.

“In most cases, a brain scan is able to detect it.

“When it comes to treatment, there are a few options. Some patients, like Nazhatulshima, underwent a combined procedure of embolisation followed by surgical resection.

A TANGLE OF BLOOD VESSELS

IN simple terms, brain AVM is an abnormal tangle of blood vessels in the brain or spinal cord, says Dr Nor Faizal Ahmad Bahuri, a consultant neurosurgeon at the paediatric neurosurgery and functional neurosurgery, Universiti Malaya Specialist Centre.

Usually, the blood flows from the heart through large vessels called arteries and branches out to smaller vessels.

These small vessels can be as thin as a single cell and are called capillaries. The capillary bed is where the blood exchanges oxygen and nutrient with the body tissue and picks up waste. The blood travels back from the capillaries to the heart through a network of veins.

“AVM can occur in any part of the body either on the surface or deep within an organ. In AVM, the arteries connect directly to the veins without passing through the capillary system.

“AVM creates a flow-related problem called high-pressure shunt or fistula. It starves the surrounding tissues of oxygen and nutrient exchanges, resulting in engorged veins that are not capable of handling a high pressure flow and at risk of thinning out and rupture.

“The severity depends on the kinds of blood vessels involved and the tissue or organ affected,” he explains.

WHAT CAUSES BRAIN AVM?
Most researchers agreed that it occurs during foetal development or developed later in life due to trauma but there is no correlation between AVM and gender, genetic, pre-existing health condition, job or lifestyle.

WHAT ARE THE SIGNS AND SYMPTOMS?
While headache and migraine-like symptoms may be present, most AVMs demonstrate the symptoms when a bleeding occurs. Common signs of brain AVM are sudden onset of severe headache, vomiting, neck stiffness, seizure, weakness in one part of the body (similar to in stroke) or hearing an abnormal sound like swishing or ringing.

WHAT HAPPENS IF IT IS UNTREATED?
There is a risk of AVM bleeding, which eventually leads to death. Once the AVM bleeds, it is nine times more likely to bleed again during the first year.

HOW CAN IT BE TREATED?
AVM can be treated with surgery, endovascular intervention, radiosurgery or a combination of treatment modality.

Endovascular embolisation is commonly performed to reduce the size of AVM and the risk of bleeding during surgery.

It is a minimally-invasive procedure that uses a small catheter inserted into the blood vessels to deliver glue or materials that can obstruct the blood flow into the AVM.

Radiosurgery aims precise beams of radiation at the abnormal vessels. It can be used to treat small AVM or as adjuvant treatment to treat residual AVM after surgical excision.

Surgical resection involves opening of the skull or craniotomy. Surgery offers an immediate cure if all AVM is removed.